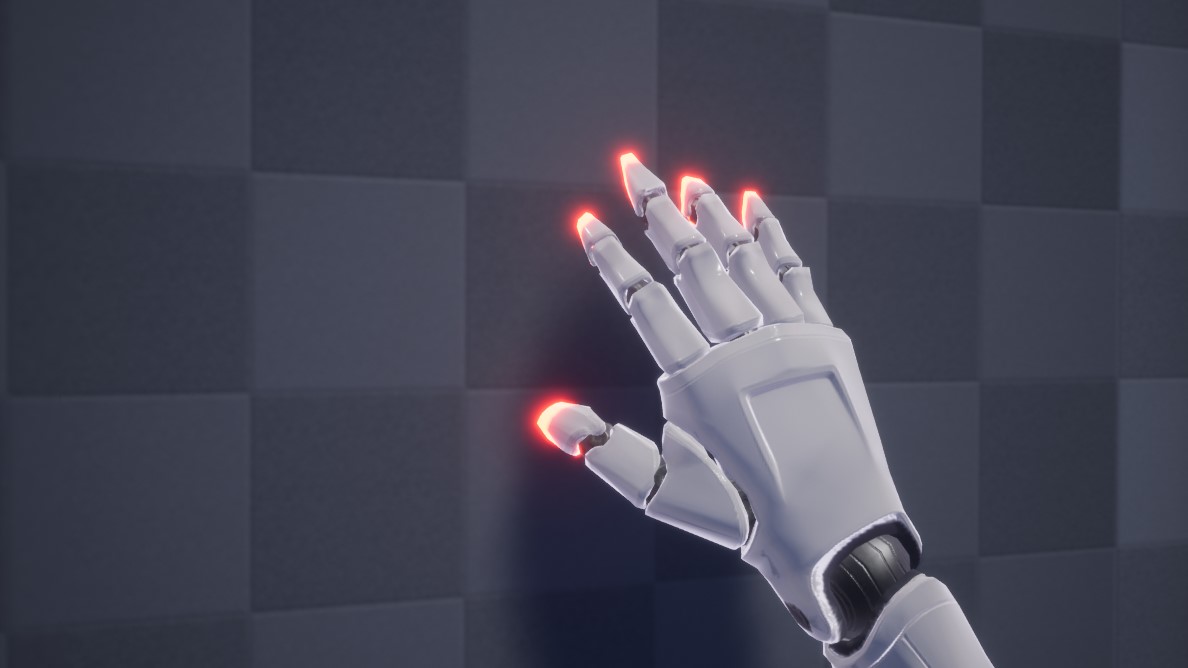 In VR development, because the motion of the first person character is precisely mapping the real players’ body(mainly hands) movement, the environment collision will never be able to prevent the player model from intersecting with the surrounding meshed. This is a well-accepted limitation of VR technique, however I personally feel it is a bit annoying if there is nothing done visually to address this fact.

During my current VR project, I was trying to create an effect to “soften out” the harsh clipping when players interact with the environment. This problem has been well addressed by this amazing post.

The post provides several solutions to this issue and are all very practical and effective:

Here in the post I want to cover more details about the implementation and troubleshooting of the first 2 solutions.

Use Depth Expressions to Highlight the Intersection

The PixelDepth expression outputs the distance from the camera to the pixels currently being rendered.

The values it returns are very big and not normalized, so if you plug it into color output the result will be all blown out. You have to devide it with a big number and clamp it to get a proper look.

Use it to drive opacity.

If an object has material outputing SceneDepth as color (after scaling and clamping), because of this feature, the output can show the objects that occluded. Also because it’s accessing the scene depth, the material using this expression should use translucent as its blend mode to avoid itself writing the depth buffer.

Only translucent materials may utilize SceneDepth!

Sphere in the front assigned with material that outputs SceneDepth as color; sphere in the upper back is in translucent blend mode, which is not written into scene depth buffer.

DepthFade is a packed-up node used to fade a transparent object according to scene depth pass, to soften the seam where it intersects with opaque object.

Use it to drive opacity.

Use it to highlight the geometry intersection. (can also make it two-sided for better effect.)

Combined with other tricks, this node can help to achieve all sorts of cool FX like energy fence/shield etc. 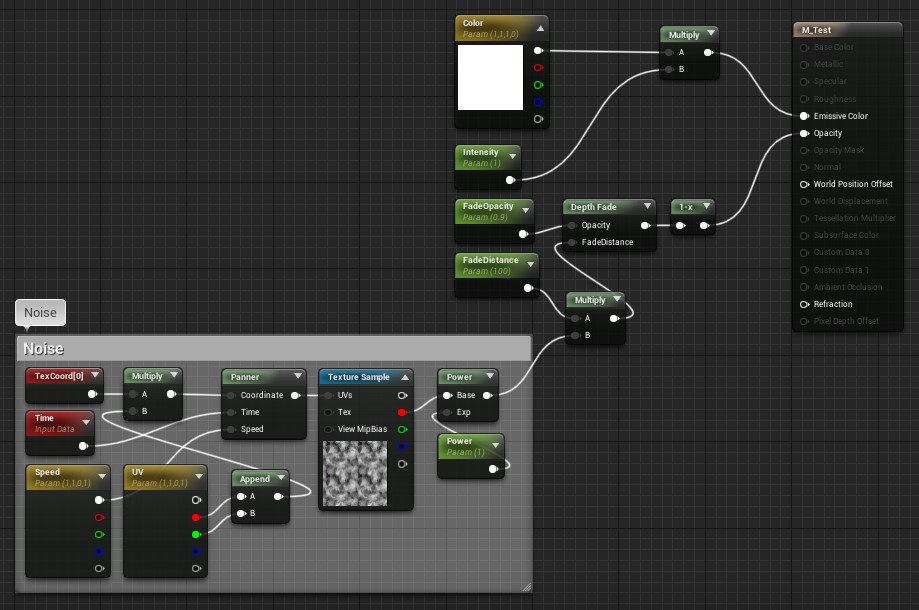 Add tiling noise to the intersection.

After going through all the above concept, let’s create the intersection hightlight on a hand. Just simply use DepthFade node to lerp the emissive output. 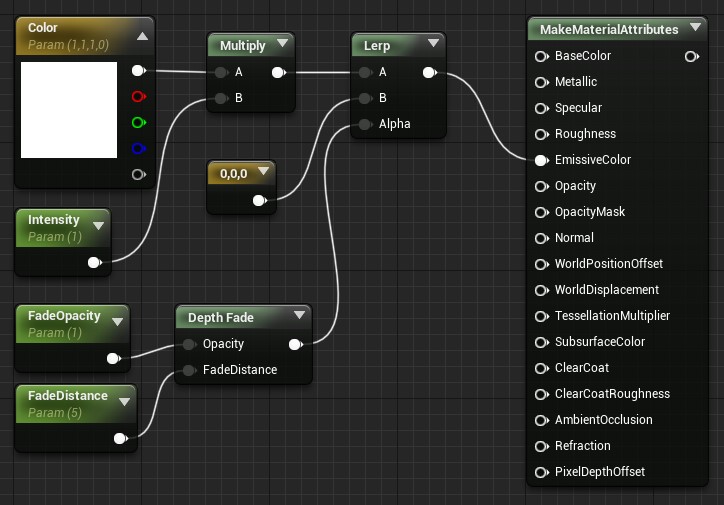 However, this causes issues that because DepthFade requires material to be translucent, the final rendering has serious lighting and sorting problems. The sorting issue is a common problem to encounter while working with transparency in Unreal, and is also a known limitation of the engine. Tom Looman’s Amazing Post explains the solution very well and here I am going to document my way of implementation for future reference.

Now the lighting is correct but we still have ugly self-sorting bug. To fix this problem, we need to use a little trick with custom depth buffer. Basically you can label certain mesh components to be written into custom depth buffer and later to be accessed in material editor through SceneTexture:CustomDepth node.

Since the engine itself cannot handle self-sorting for translucent objects, we can calculate by ourselves. Just create a duplicated dummy mesh and set it to be rendered in custom depth buffer but not rendered in the main pass. Note that because we want the custom depth to have the correct sorting, we have to assign a opaque material to the dummy mesh.

I also tend to parent the dummy mesh under the original mesh and name it “DepthFix”. 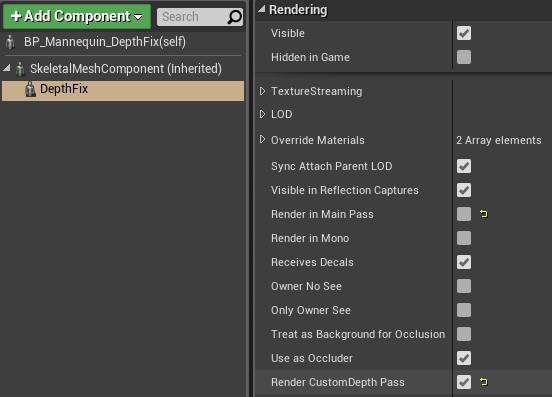 You can visualize the custom buffer in the editor, and then you will see the dummy mesh got rendered there. 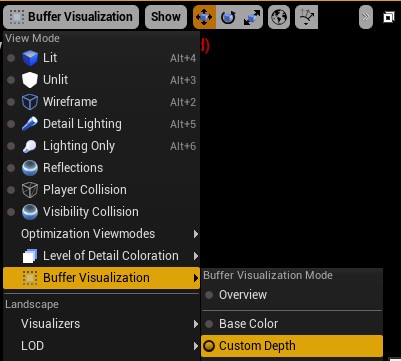 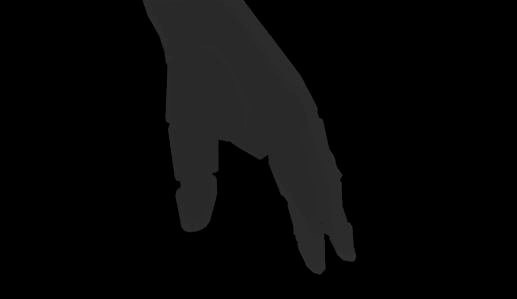 Next, in the material, calculate transparency based on PixelDepth and CustomDepth and output into Opacity. The idea is to compare the pixel depth of the wrong-sorted geometry with the custom depth of the dummy geometry. Because the custom depth right now provides the correct sorting information thanks to our opaque dummy mesh, we can: 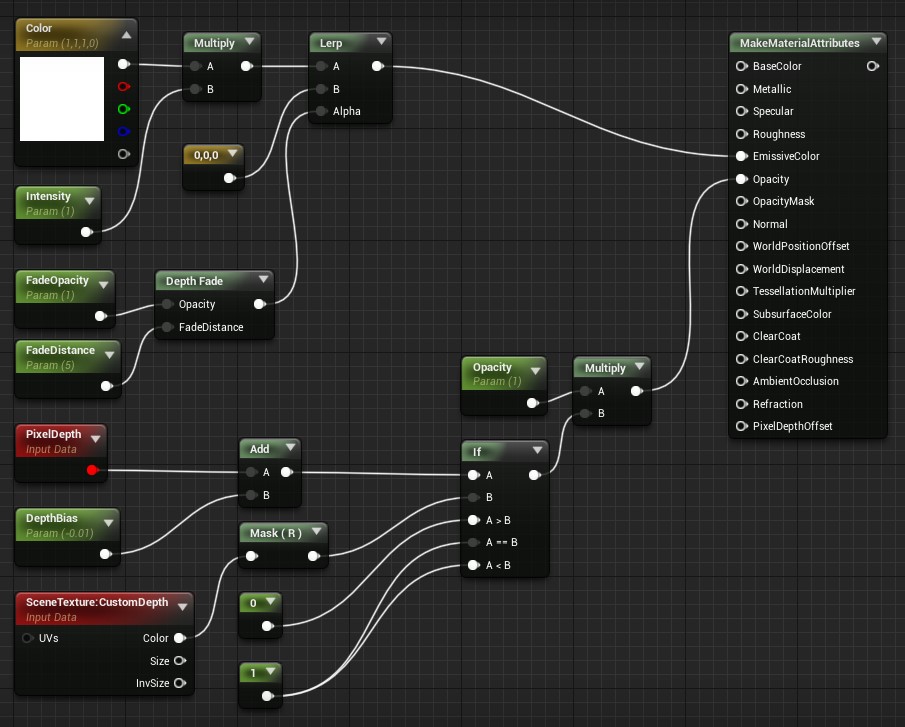 Playing with different DepthBias and Opacity.

Now with all the work above, we have a nice intersection highlight effect that

Note that any operation you did with the original mesh, like play animation, you have to apply to the dummy mesh as well to keep both of them in sync!